In Rise of Skywalker, we finally know who and what Supreme Leader Snoke is. He is an artificial life form created by Palpatine to serve as the puppet ruler of the First Order. We saw multiple clones of Snoke floating in vats on Exegol. I rather like these revelations about Snoke because they provide something to the dark side we didn’t see in Canon yet. In Legends, the ancient Sith made frequent use of what is called Sith alchemy, which is the practice of using the dark side to create and distort life. The very first Sith known as the Exiles invented Sith alchemy and used it to create all kinds of unholy abominations that helped them forge the original Sith Empire. In Legends, Palpatine was also a practitioner of Sith alchemy so it would make sense that he would be in the new Canon. Let us not forget that Palpatine’s own Master, Darth Plagueis, could use the Force to create and prolong life. It is possible that Palpatine not only used his old Master’s tricks to cheat death but also create a being that was strong in the Force. Palpatine would make Snoke as strong as he needed to be in order to convince the galaxy that he was the true power behind the First Order. With Snoke serving as his proxy in the First Order, Palpatine himself was safely outside of the reach of either New Republic and Resistance and able to rebuild his true strength with impunity. This is a trick that was used by Padme Amidala, who used her handmaidens as her proxies and doubles. Palpatine, who came from the same planet as Amidala, clearly stole the same idea from his former queen. Some fans may not like this idea about Snoke, but I can see and understand the method behind it. I look forward to seeing or reading a show or book that talks about how Palpatine created and trained Snoke in the dark side. It will be like a Star Wars version of Frankenstein. 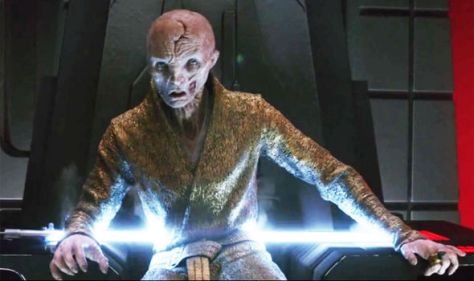 I was surprised as anyone when Kylo Ren killed Supreme Leader Snoke, but I am not displeased. This provides us with a very interesting scenario because Kylo Ren succeeded where his grandfather failed with Palpatine. Throughout Palpatine’s reign, Darth Vader remained the Emperor’s loyal enforcer and did not take significant opportunities to overthrow him. Now, the Sith may be gone, but Snoke and Kylo Ren obviously continued Darth Bane’s Rule of Two, which dictates that there can only be one master and one apprentice: one to embody power (Snoke) and the other to crave it (Kylo Ren). It was clear that Kylo Ren was no match for his master in a direct contest of raw power. However, knowing Snoke was constantly reading his mind, Kylo Ren was able to manipulate his own thoughts so that he would thinking of something that was technically true. That was what allowed Kylo Ren to outsmart his master. It is as Palpatine once said in the Legends continuity, “Choose someone more cunning and you won’t be able to block the blade at your throat.” Kylo Ren may not yet be as powerful as his grandfather, but he is certainly more cunning. Now, Kylo Ren is the Supreme Leader of the First Order, which will be a way for us to see what it would have been like if Darth Vader overthrew Palpatine and became Emperor.